A lubricating role for hyaluronic acid has been proposed in muscle connective tissue to enhance sliding between adjacent tissue layers. A specific type of fibroblast, embedded in dense fascial tissue, is thought to be specialized for the biosynthesis of hyaluronic acid-rich matrices. Their related activity may involve the ability to regulate sliding between adjacent muscle connective tissues.

Hyaluronic acid is also a major component of the skin, and it is involved in repairing tissue. When the skin is exposed to too much UVB radiation, it becomes inflamed and the cells in the dermis stop producing as much hyaluronic acid as possible and increase its degradation rate. Hyaluronic acid degradation products then accumulate in the skin after UVB exposure. 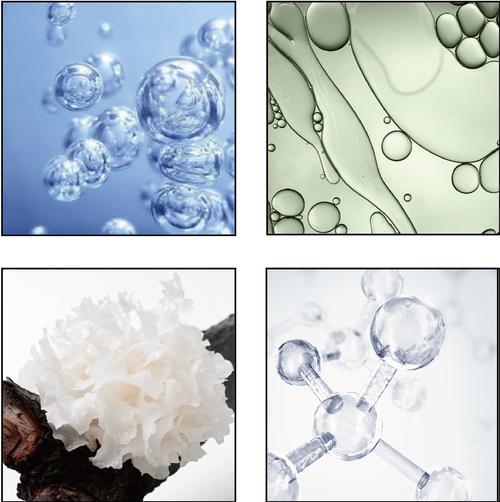 Although it is abundant in the extracellular matrix, hyaluronan also contributes to tissue fluid dynamics, motility, and proliferation of cells and is involved in many cell surface receptor interactions, including in particular its major receptors CD44 and RHAMM. upregulation of CD44 itself is widely considered to be a marker of cell activation in lymphocytes. The contribution of hyaluronan to tumor growth may be due to its interaction with CD44. The receptor CD44 is involved in cell adhesion interactions required by tumor cells.

Although hyaluronan binds to receptor CD44, there is evidence that hyaluronan degradation products transduce their inflammatory signals via toll-like receptor 2 (TLR2), TLR4, or TLR2 and TLR4 in macrophages and dendritic cells. TLR and hyaluronan play a role in innate immunity.

As a major component of the extracellular matrix, hyaluronic acid has a key role in the skin wound repair phase such as tissue regeneration, inflammatory response, and angiogenesis. However, as of 2016, reviews of its effects on wound healing in burns, diabetic foot ulcers, or surgical skin repair have shown only limited evidence of positive clinical studies.

Hyaluronic acid binds with water and swells to form a gel, allowing it to be used in skin treatments as a dermal filler for facial wrinkles; its effects last approximately 6 to 12 months and the treatment has received regulatory approval from the U.S. Food and Drug Administration.

Granulation is an infused fibrous connective tissue that replaces fibrin clots in a healing wound. It typically grows from the base of the wound and is capable of filling almost any size wound that it can heal. HA is abundant in the granulation tissue matrix.

A variety of cellular functions critical to tissue repair may be attributed to this HA-rich network. These functions include promoting cell migration to the temporary wound matrix, cell proliferation, and the organization of the granulation tissue matrix. The initiation of inflammation is critical for granulation tissue formation; therefore, the pro-inflammatory effects of HA described above also contribute to this phase of wound healing.

Sodium hyaluronate provides an open hydrated matrix that promotes cell migration, while in the latter case, the control of directed migration and associated cellular mechanisms is mediated through specific cellular interactions between HA and cell surface HA receptors. It forms links with several protein kinases associated with cell motility, such as extracellular signal-regulated kinases, adherent spot kinases, and other non-receptor tyrosine kinases.

During fetal development, the migratory pathway for neural crest cell migration is enriched in HA. HA is closely associated with cell migration processes in the sarcomeric tissue matrix, and studies have shown that cell motility can be at least partially inhibited by HA degradation or by blocking HA receptor occupancy.

By powering cells, HA synthesis has also been shown to be associated with cell migration. Basically, HA is synthesized at the plasma membrane and released directly into the extracellular environment. This may contribute to the hydration microenvironment at the site of synthesis and is critical for cell migration by facilitating cell detachment.

HA plays an important role in the normal epidermis. Due to several of its properties, HA also has an important role in the re-epithelialization process. These include its role as a component of the extracellular matrix of basal keratin-forming cells, which is a major component of the epidermis; its free radical scavenging function, and its role in the proliferation and migration of keratin-forming cells.
In normal skin, the concentration of HA is relatively high in the basal layer of the epidermis where keratin-forming cells proliferate. CD44 is juxtaposed with HA in the basal layer of the epidermis and, in addition, it has been shown to be preferentially expressed on the plasma membrane facing the HA-rich stromal pocket. Maintaining the extracellular space and providing open and hydrated structures for the passage of nutrients are the main functions of HA in the epidermis.

One report found that HA levels increased in the presence of retinoic acid (vitamin A). The suggested effect of retinoic acid on skin photodamage and photoaging may be at least partially associated with an increase in skin HA content, leading to increased tissue hydration. It has been proposed that the free radical scavenging properties of HA help protect against solar radiation, supporting the role of CD44 as a

HA receptor in the epidermis

Epidermal HA also acts as a manipulator in the proliferation of keratin-forming cells, which is essential for normal epidermal function and for the re-epithelialization process in tissue repair. During wound healing, HA is expressed at the wound edges, in the connective tissue matrix, and paired with CD44 expression in migrating keratin-forming cells.