Everything You Need to Know About Dihydromyricetin

Dihydromyricetin, a special flavonoid extracted from Ampelopsis, is known as “soft gold in flavonoids”.
This kind of substance has many peculiar effects, such as scavenging free radical, antioxidation, antithrombotic, anti-tumor, and anti-inflammatory. And dihydromyricetin is a more special kind of flavonoid. 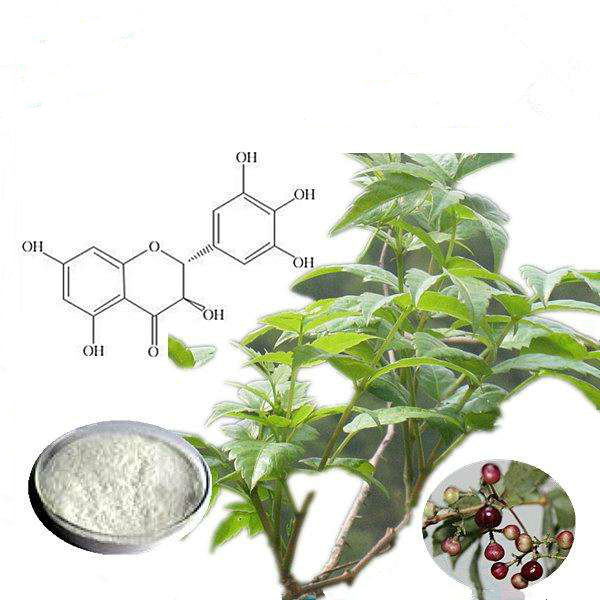 What are the characteristics of Dihydromyricetin?

1, the general flavonoids are basically insoluble in water, soluble in ethanol, and dihydromyricetin
is easy to dissolve in hot water, that is to say, as long as the dihydromyricetin in rattan tea can be soaked with open water, the efficacy is better.

2, in addition to the general effect of flavonoids, HMP also has the effect of relieving alcoholism, preventing alcohol liver, fatty liver, inhibiting the deterioration of hepatocyte, and reducing the incidence of liver cancer.

3, Dihydromyricetin has a small molecular weight, which is easier to penetrate the blood-brain barrier and work faster.

What are the benefits of Dihydromyricetin?

The regulation of blood sugar and blood lipid:
Dihydromyricetin could obviously inhibit the increase of blood glucose induced by four oxalacil, adrenalin, and streptozotocin. At the same time, the level of serum insulin was increased. The infiltration of lymphocytes in the pancreas tissue was significantly reduced, the inflammatory response was obviously reduced, and the number of islets increased significantly.

Antioxidation:
Dihydromyricetin, with a purity of 98%, can obviously inhibit the formation of malondialdehyde (MDA) in the myocardium, liver, and brain homogenate, and increase the effect of the inhibition of MDA formation with the increase of the concentration of Dihydromyricetin, and the clearance rate of the two benzene three nitrophenyl hydrazine (DPPH) free radical in the test system. Dihydromyricetin can obviously inhibit the formation of MDA in oil and increase the antioxidant effect and has a strong antioxidant effect on animal oil and vegetable oil.

Antitumor effect:
In recent years, anti-tumor pharmacodynamic studies have found that one of the active components is Ampelopsis, a small molecule compound that has a strong anti-cancer effect. The antitumor effect in vitro shows that the compound can improve the therapeutic effect of the tumor and improve the patient’s living body disease by inhibiting the growth of tumor vessels and regulating the immune function of the cell. The tumor suppressor effect is obvious in the model test of leukemia and nasopharyngeal carcinoma.

Researchers say that dihydromyricetin can block the most important inhibitory receptor in the central nervous system, namely, GABAA receptor. This antialcoholism principle is the same as that of some promising antialcoholism drugs now, but the latter can cause convulsions. In the latest issue of the Journal of Neurology, the researchers published a report: “take dihydromyricetin in alcohol, and you will not be addicted to alcohol.” However, this research achievement will take some time to develop antialcoholism drugs.